Tofukuji Temple is one of Kyoto's lesser known but most beautiful temples. Prepare for your visit with us!

A major site for Zen Buddhism, Tofukuji Temple in Kyoto is a delightfully traditional and picturesque temple, especially in the autumn, when the Momiji leaves are at their most entrancing. Read on for an in-depth look at the temple, its grounds and what you can expect from a visit.

Built in 1236, the impressive buildings found at Tofukuji were originally inspired by the architecture of two temples in Nara: Todaiji and Kofukuji. An amalgam of the two also gave Tofukuji its name. Find the temple in the south-east of Kyoto at the foot of the Higashiyama mountains surrounded by nature and wonderfully traditional streets and shops. Like many buildings of equivalent age, the temple has suffered its fair share of fires and crises over the years, meaning much of today’s structure is of 20th-century origin.

In 1952, Tofukuji’s main gate was listed as a Japanese national treasure. Today, the gate’s size, intricate craftsmanship and reputation make it one of the main tourist draws to the complex as a whole.

Not as intensely crowded as many of the more famous temples in Kyoto (except, perhaps, in Momiji season), one can stroll the grounds at a leisurely pace just as it was designed to be enjoyed. The gardens, scattered throughout the complex, are what tend to leave a lasting impression on most visitors. These exquisite, classically landscaped Japanese gardens feature all the trappings you’d gladly expect, including abstract moss and rock designs and lovingly raked sand.

The Southern Garden is the most elaborate of the four gardens you’ll find at the temple: Composed, in total, of four rocks gardens and five moss-covered mounds built to represent sacred mountains.

The Northern Garden, located near the Tsuten-Kyo bridge, is notable for its chequer-board moss garden and square-cut stones.

The Western Garden is made up of moss and azalea shrubs trimmed into a chequerboard pattern with a Chinese inspiration.

The Eastern Garden Provided by Foursquare

The Eastern Garden consists of seven cylindrical stones arranged within a field of moss, inspired, it is said, by a constellation known as the Great Bear of Heaven. 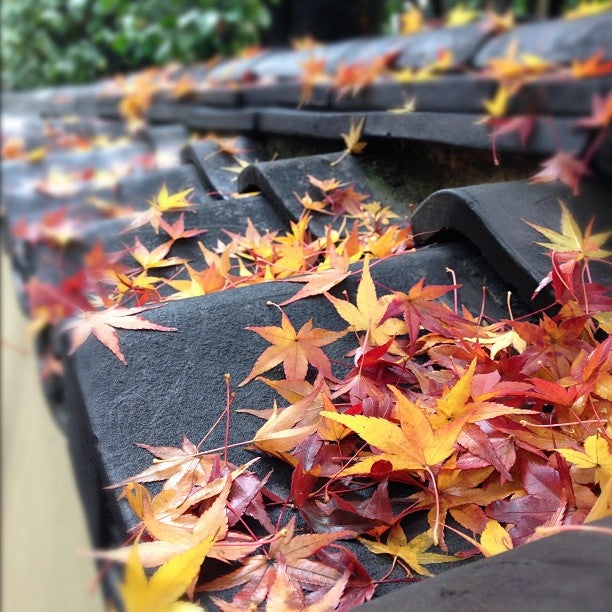 Tofukuji Temple is one of the best spots in Kyoto in which to enjoy Momiji in the autumn. As the seasons change, the temple’s leaves turn myriad shades of red and orange, making for a wonderful sight. The temple, ablaze with color, is a treat for visitors and really shouldn’t be missed when in town. From early to mid-November is the best time to check out this natural spectacle.

Visit in conjunction with a trip to nearby Fushimi Inari for a temple packed day out.

From Kyoto Station, take the JR Nara Line or the Keihan Main Line to Tofukuji Station from which the temple is 10 minutes on foot away. The whole route is signposted for extra ease of access. Alternatively, take bus number 208 to Tofukuji bus stop.

Travelers love Kyoto! How about you? Let’s share our experiences with people around the world.

Hi, I'm Inès, I love to travel all around the world especially in Japan, I will share with you all the information needed to have the best trip of your life!

Ryoan-ji – Temple of the Peaceful Dragon

Eikan-do – The Temple of Wisdom

Nanzen-Ji – The Home of Rinzai Zen

Kyoto Autumn – Top Things to Do in Kyoto in Autumn

Things to Do in Kyoto in August

Category Ranking【Things to Do in Kyoto】