Camping in Japan – Everything You Need to Know

Camping in Japan is a yen-saving and original way to experience the country. Find everything you need to know before pitching your tent right here.

Japan is an expensive country. This fact needs to be internalised, processed and accepted before you even step off the plane. However, for those who combine the qualities of frugality and resourcefulness, money-saving tactics are there to be taken advantage of. One such tactic is trying your hand at camping in Japan.

Camping is perhaps not as common in Japan as in Europe or the US but that doesn’t mean that it doesn’t exist – among the young and old, in fact, camping is a time-tested and popular pursuit. Accordingly, campsites are dotted across the nation, from the wilds of Hokkaido to the beaches of Okinawa.

Whilst you won’t be doted over as in a ryokan or be comforted by the bland familiarity of a chain hotel, camping in Japan can plunge you into the beautiful heart of the country and save you some serious yen at the same time.

In what follows we’re going to guide you through the ins and outs of camping in Japan – from tips on the best campsites anywhere, advice on camping near Tokyo, to the lowdown on urban camping, we’ve got you covered. Scout’s honour, you won’t be left wanting.

Whilst obviously it would be our pleasure to run you through each and every campsite in the country, unfortunately, the Japan National Tourism Organization has beaten us to it. The list, in English, covers each region of the country and includes indispensable access and contact information. Take a look, but only after considering our expert recommendations: 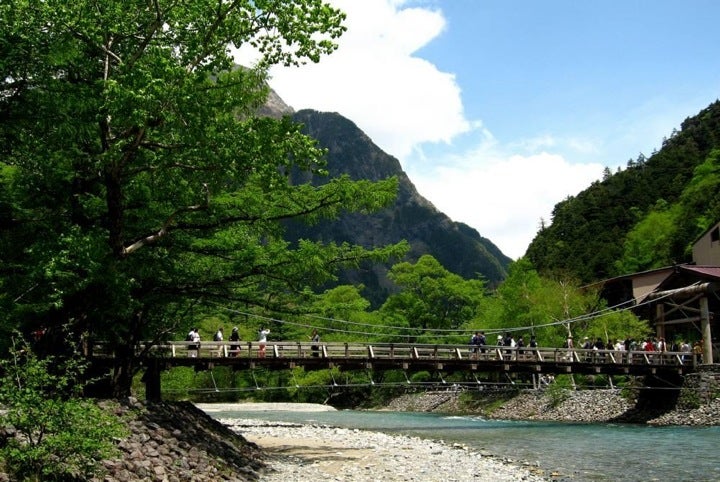 In western Nagano Prefecture, around five hours by bus from central Tokyo, Konashidaira Camping Ground in Kamikochi has long been a favourite among clued up campers. Kamikochi is a remarkably beautiful location; combining a feeling of isolation and calm without being cut-off, it is the perfect place for banishing the cobwebs and indulging in some major nature appreciation. The campsite itself is very self-contained, offering the less-prepared among us tent or cabin rental, equipment hire, a store stocked with all the essentials and even a restaurant. With room for up to 300 campers it’s not a small campsite, but being set over a large chunk of lands means you won’t be tripping over too many guy lines on your way to the toilet at four in the morning.

Shiretoko National Park in deepest Hokkaido is one of Japan’s most remote national parks, as far, at least in feeling, from the crowds and lights of Shinjuku as you’re likely to get. Here, you can’t help but sink into a state of pure relaxation, whether helped by the warm waters of the many onsens or the views out over the endlessly rolling hills. The Shiretoko National Camping Ground is set in the heart of the park yet remains pretty accessible and close to the best of what the park has to offer.

Access: 15 minutes on foot from Utoro Bus Terminal which can be reached via the Shiretoko Airport Liner from Memambetsu Airport in just over two hours.

Where better to stay in Okinawa that right on the beach. At Yagaji Beach Camping Ground, a nicely open, seemingly organic camping ground wedged between the East China Sea and the Haneji Inland Sea, you can do just that. The beach has a welcome feeling of tranquillity and calm, yet with facilities including shared showers, a store and rental services, you are well accommodated for in every regard. With flights to Okinawa from the mainland surprisingly pricey, this could just your chance to cut costs whilst you’re there.

Access: Roughly 90 minutes by car from the capital, Naha. Buses available from the city.

Free camping can have two meanings. One, camping free of charge on a campsite. Two, camping free of charge out in the wild, not on an official campsite. The latter option, although not strictly illegal, exists on the margins of polite, play-by-the-rules Japanese society. As a general rule, if you want to do some free camping, make sure you find a nice secluded spot, stay there for as little time as possible, and importantly, leave no traces behind you. As a foreigner you’ll in most cases be given an easy ride should you be discovered; at best you’ll be greeted with an inquisitive smile, at worst politely told to move along.

As for the former meaning, there are, surprisingly, a good few totally free campsites spread across the Japanese islands. Although most campsites are pretty reasonably priced for an overnight stay (200 – 1,000 yen), should you be particularly hard up, these could be your saving grace. Take a look at our top picks:

You can’t go far wrong with this unmanned campsite next to the magnificent Lake Onuma. With easy access to all the nature-centric activities on offer in the area and facilities including vending machines, restrooms and cooking areas, it may be tempting to never leave. And rent free, why not?

Access: 6 km from JR Onuma-koen Station and 1 km from JR Choshiguchi Station – walk, catch a local bus or take a taxi from the stations.

Not too far from cosmopolitan Fukuoka, Omaki-yama Campsite is located 338 meters above sea level, making for excellent views of the surrounding countryside. The facilities are basic but do include a roofed cooking area and restrooms. With no staff, visitors simply turn up and pitch their tent in the best spot they can find.

Access: Equidistant from Fukuoka or Kumamoto, roughly a 90-minute drive from each. The closest train station is nearby Setaka Station.

Essentially an unused field with no running water or toilet, this campsite is certainly basic. However, its location, not far from Kyoto and Osaka, makes it a good place to discover the delights of small-town Japan when the pace of the city starts to drag or the yen dries up.

The majority of tourists to Japan spend most of their time in and around Tokyo. For places to stay in the city, we’ve more than got you covered, but if you’ve travelled to the largest, most dense urban area on earth and you’ve decided you’d like to do some camping, we’re also here to help. Surprisingly, camping in Tokyo isn’t as difficult as you might imagine, with a number of campsites not too far outside of the city. Here are the best of what Tokyo has to offer:

Probably the closest camping ground to the city centre, Wakasu Kaihin-koen Camp-jo is ever-popular with Scout troops and school trippers, making it the perfect spot to relive the halcyon days of your youth. If your youth was more video games and crisps than orienteering and marshmallows, we’re sure you’ll have a good time anyway. With a choice of multiple cooking facilities and fire-pits, plus all the 24-hour convenience of the city but a short train ride away, this is camping without the commitment.

Hikawa Camp-jo in Okutama, a hilly, nature packed town not far from central Tokyo, is another trouble-free camping option, perhaps better suited to the casual camper. With cheap rental of all the gear you may have forgotten, nearby shops, cooking facilities and much more, Hikawa understands the needs of the enthusiastic but inexperienced camper.

Another campsite near Okutama, this time veering closer to the lovely Akikawa Valley. Kanotoen Campground is a little more basic than our previous choices but makes up for it in other ways. Aside from hiking one or all of the nearby trails, this campsite offers activities such as rock-climbing and fishing, plus there are some excellent restaurants and onsens nearby.

Access: From Shinjuku Station take the Seibu-Haijima line to Haijima Station and change to the Itsukaichi Line to Musashi Itsukaichi Station.Take a local bus or walk from here.

Urban camping as a concept has gained quite a lot of traction of the past few years in Europe and North America, yet in Japan, the idea is still a relatively new and perplexing one. That is not to say that it’s impossible, however. In fact, if you scour the backwoods of the internets for long enough, travelogs detailing urban camping experiences can be found aplenty. We’ve done the digging and come up with the answers to all your burning urban camping questions.

Firstly, the price. Free, obviously. Secondly, the feeling of adventure, of detouring from the well-trodden tourist paths and witnessing a different side to the city.

This is the difficult part. Parks are your best bet, but the popular tourist parks or those near train stations are often busy at all times of day and night, or worse, close when the sun sets. It is, therefore, a good idea to avoid these spots and head to quieter residential areas. Residential areas often have a number of small parks, perfect for setting up your tent in a quiet corner for the night.

No, is the short answer. Be aware, however, that it is not a common sight in even the most bohemian of neighbourhoods. As a result, if you’re too indiscreet, you’ll at best stick out like a sore thumb and at worst be told to move on by the police. As a general rule, stay as hidden as possible, stay for as short a period of time as possible, don’t stay in the same spot on consecutive nights, stay quiet and leave no trace behind you. Follow these rules and you should be alright.

Yes, but take precautions anyway. Japan is very safe, but it won’t hurt to hide valuables and avoid behaviour that may lead to confrontation anyway.

Japan Visa Requirements – How to Open the Doors to Japan

A Guide to the Japanese Countryside