What is Robot Restaurant?

Robot Restaurant (ロボットレストラン/Robotto Resutoran), with an investment of 10 billion yen, was opened in July 2012 in the heart of Kabuki-cho (Shinjuku) and has been providing a bizarre dinner theater experience to thousands of visitors ever since.

Robot Restaurant cannot be fully described in any single phrase. Pure insanity. Wackiness. Eye-popping. Jaw-dropping. Sensory overload. Culture shock. These words, perhaps, come closest to explaining just how unique this restaurant is. A combination of Wreck it Ralph, Transformers and Tron Legacy, you will go on a wide ride into the unknown.  Some people love it. Some people hate it. It’s up to you to decide.

It’s nearly impossible to get lost on the way here. As you head towards Kabuki-cho, advertisements pretty much guide the way. If any foreigners come into sight, follow them! Chances are they’re heading for the Robot Restaurant!

The restaurant strictly forbids sunglasses, costumes and big wigs as well as the admission of any drunk customers, crime organization affiliates or people with tattoos. That being said, as long as your tattoos are covered, you will be fine.

Failing to show up 30 minutes before the show starts will lead to the cancellation of your reservation.

There are normally four shows per day, with each lasting for 90 minutes with an intermission. For the detailed schedule, please click here.

Because of its quick, lively and colorful nature, the Robot Restaurant mainly appeals to young people and foreigner tourists.

Due to the loud music and the bright flashing lights used in the show, it may be uncomfortable for small children and may make some people feel ill. Nevertheless, the robot show is loved by many children and ear protectors for little kids are also provided.

The first area you are sent into is the waiting lounge which looks like an enormous pachinko machine with mirrors and glittering flashing lights everywhere. There are many tables for you to chill at before you are escorted to the main stage.

As you enjoy drinks purchasable at the counter, a jazz band in robot costumes will put on a pre-show performance, playing soft classical music and familiar songs.

There are also some noteworthy robots on display like the giant warrior Fembots. 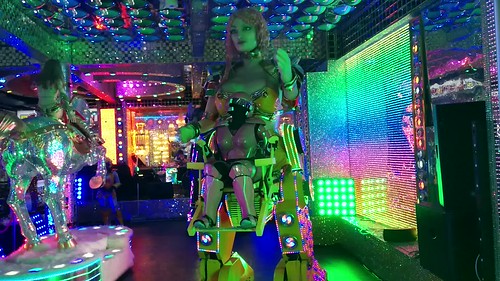 Each Fembot has an upper torso and two legs installed on a motor-driven frame, allowing it to glide around and move certain body parts. Later on, audiences members are allowed to try operating these Fembots or sit on their laps for a picture.

At the end of the pre-show, you will be guided to the main stage in the basement. If you take the stairs, ensure that you don’t trip while your eyes struggle with the blinding lights and colorful images.

When you reach the basement, you will be greeted cheerfully by huge robots and female staff dressed in robot costumes.

Snacks and drinks are also available at the counter before the show and during the intermission.

The stage in the center resembles a fashion runway with three rows of tables set up on both sides of the room. Tables are installed on riser platforms of different heights to ensure an open, unencumbered view of the action for the whole of the audience. However, because all of the seats are non-reserved, arrive early to snap up a front row seat.

The tables are similar to elementary school desks and each fit two people perfectly and include space for cups and bento boxes. Though you may have to squeeze yourself into this cramped space, getting in and out  to grab drinks or snacks shouldn’t be a problem. The staff also circulate often to take food and drink orders.

Despite its name, this place is more like an entertainment theater than a real restaurant. They offer only three different choices of bento box of ordinary quality for dinner: Grilled beef dinner box (A set), thinly sliced marinated beef dinner box (B set), and robot sushi (C set). If you purchased a bento box, it will be handed to you as you make your way into the theater.

In fact, Shinjuku is full of great restaurants and izakayas so your money will surely be better spent on meals outside of the Robot Restaurant. Please read our article about Shinjuku for some alternative suggestions.

Nevertheless, it may be worthwhile to grab some alcohol and caramel popcorn to chew on during the show.

There are several acts, though despite the name, the robots do not show up in all of the routines and appear on stage less than you may expect. Also, you may be disappointed if you are hoping to see any robot waitresses, bartenders or staff. Instead, the show is a weird and unexpected fusion of sexy dancing girls in outrageous costumes, massive robot fights, big LED screens covering the walls with anime-style graphics, multiple flashing lights and insane lasers. It’s hard to absorb and fathom all of the crazinesses. The show does a good job of living up to foreigners’ expectation of a wacky Japan that cannot be found anywhere else.

The robots are controlled by 20 people (both remote-controlled and piloted) during the show and maintained daily by another team.

In terms of rules during the show, there are not many to follow except turning on your phone’s aeroplane mode to avoid interference with the robots. You will also be warned by the staff to keep your hands and head away from the stage for safety reasons. Photography and recording without flash are allowed, which is an awesome chance to document the craziness.

The show is an interesting combination of traditional and modern Japanese culture with some Western elements.

Later on, there are a bunch of remote-controlled moving floats on which the cast will stand, sing, dance, smile and interact with the audiences. 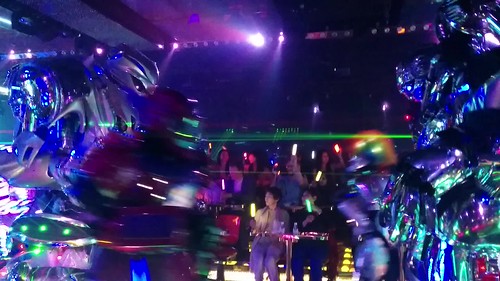 Overall, the performers are athletic, enthusiastic and full of energy. They never fail to engage and get the crowd involved. During the show, glow sticks will be handed out to the audience so that you can wave along and support your favorite dancers or robots. Allow yourself to be silly for a while and sing, scream or dance with them!

At the end of the show, audiences are free to take pictures with all of the robots as well as with the awesome DJs in robots costumes. What are you waiting for?

How to buy tickets?

In general, four shows run daily at 4:00 pm, 5:55 pm, 7:50 pm, and 9:45 pm. The detailed schedule can be found here. Some hotels provide guests with discount coupons and reservation services so make sure you check with them first! Otherwise, tickets can be purchased easily at the restaurant itself or online.

The ticket counter is separated and located right in front of the restaurant. Each ticket costs 8,000 yen. As one of the main tourist attraction in Tokyo, the counter may be overcrowded or tickets sold out. Thus, reservation is recommended. You can also store your luggage and coats in the lockers provided.

Tickets can be booked directly from the official website, though the price is pretty much the same.

Tripadvisor also provides a combined package of the Robot Restaurant and another famous restaurant in Tokyo such as Alice in a Labyrinth, etc. For more information, please click here.

Hello from Compathy Magazine! I'm Linh Duong. We truly hope we can be your most trusted travel companion :)