The 10 Best Japanese Arcades in Tokyo

Though perhaps past its peak, the arcade game industry in Japan is still worth a jaw-dropping 450 billion yen a year, a figure surpassing big-hitting Japanese pastimes like manga and internet cafes easily.

Where did it all start? 1978, to be precise. This was the year of Pacman and Space Invaders, when Japanese youth first encountered the video game buzz. By the time of the arrival of Street Fighter in the 1990s, it was clear that arcades were there to stay. Japan’s boom years were good to arcades and though revenue cooled off in the decline that followed – not helped by the rise of home and mobile gaming devices – arcades are now such a fixture, so tied up with Japan’s contemporary image, that contemplating their disappearance is difficult.

Indeed, the blinding neon, deafening noise and kitschy aesthetic of these arcades colours many perceptions of modern Japan. Whilst clearly the country is more than the sum of its stereotypes, indulging your inner gamer is a worthwhile pursuit when here on a visit. Whether you do this to probe lofty theories on the Japanese psyche or to simply enjoy the games for what they are doesn’t particularly matter, you’re sure to have some fun.

Grab your change purse and warm-up your fingers, we’re here to point you in the direction of Tokyo’s 10 very best Japanese arcades. We’ll cover the classic variety as well as some modern twists on the theme in an effort to give a comprehensive guide to the capitals gaming scene.

In no particular order:

On Chuo Dori, one of Akihabara’s main thoroughfares, stands Hirose Entertainment Yard, or HEY for short. The building is large but not particularly remarkable, but what’s inside is one of the holiest spots in Tokyo gaming.

Alongside newer games, HEY also does a good job of keeping classic games alive, something more than appreciated by the thriving communities surrounding them. The second floor is strictly shoot-em-up “bullet hell” games of every variety, whilst upstairs the guns are put down and more traditional fighting techniques are the name of the game.

The atmosphere in here feels authentic, all smoke and neon lights. Purportedly, HEY is the preferred hang-out of Tokyo’s serious gamers who come to show-off and swap tips, so perhaps this sense of authenticity is not misplaced. Don’t be intimidated though, its notoriety also makes HEY popular with tourists and first-timers.

Staying in Akihabara, this time at retro-gamers paradise Super Potato. Hidden away on a non-descript back street, this is a treasure trove of childhood nostalgia and a venerable museum of gaming history.

Perhaps museum is the wrong word though; the games in here scream out to be played. Super Potato splits itself into two, with both a store selling all manner of gaming merchandise, most of which you’d be hard pressed finding anywhere else, at admirably reasonable prices, plus, what we’re all here for, a gaming arcade on the 5th floor. Though small by the standards of the flashy mega-arcades, there are games here you won’t find elsewhere, including favourites such as Super Mario and 007 Golden Eye.

The Golden Age of gaming lives on in this corner of Akihabara.

Joypolis is what happens when you mix a video game arcade with a theme-park – a hybrid monster of gaming spectacle and bombast. Cross Rainbow Bridge onto Odaiba, an island just off Tokyo bay, and experience it for yourself.

Like a theme-park, you must first pay an entry fee, plus additional fees for each individual attraction. These attractions are best described as video game rides; combining traditional rollercoaster thrills with cutting edge virtual reality technology. Be led through a terrifying The Ring inspired haunted house or work together to bring down alien hoards – there seems to be no limit to the extravagance on offer here.

Though a lot more expensive than a normal arcade, Joyopolis is in another league altogether and worth the trip.

Back to the serious gaming. Club Sega, with branches across the city (Shinjuku and Akihabara the largest), lacks the flash and gimmicks of some places, but is the first choice for Tokyo’s habitual gamers. Find endless rows of machines with games new and old, including virtual horse-racing, card-based systems and classics like Tekken and Virtua Fighter.

Gamers really set up camp here, kept awake with vending machine coffee, cup-noodles and cigarettes. Most enjoy the attention, so don’t be afraid to stand and admire the years of practice on display, though ensure you don’t inadvertently put them off. What’s more, Sega often trials new games at these stores months before general release, so you could even get the jump on the majority of the gaming world. 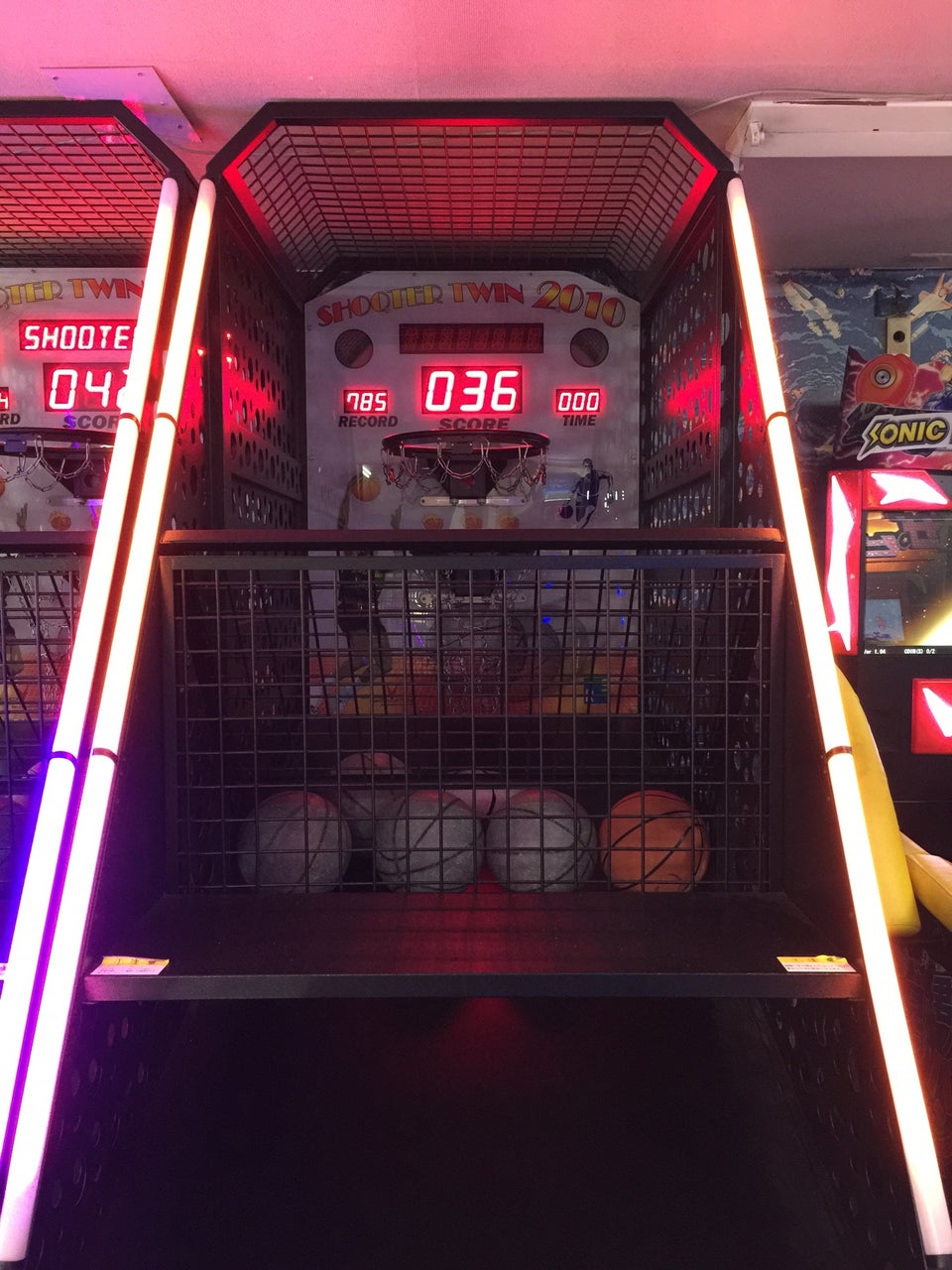 In deepest Kabukicho sits the Shinjuku Batting Centre, an unlikely entry on our list of the best Japanese arcades.

The principal draw of this place is the batting cages, which for 300 yen a pop will fire balls at you in a test of your batting prowess. However, inside the main building is a good number of arcade games, largely sporting based but also including gems such as Tetris and Street Fighter. The vibe here, due to its mixed use, is good-natured and lively, especially on an evening when a lot of users are also enjoying a few drinks (BYOB). Just be careful not to spill anything on the machines.

This is a great choice when taking in Shinjuku’s nightlife, but probably not the place to head for some serious gaming. 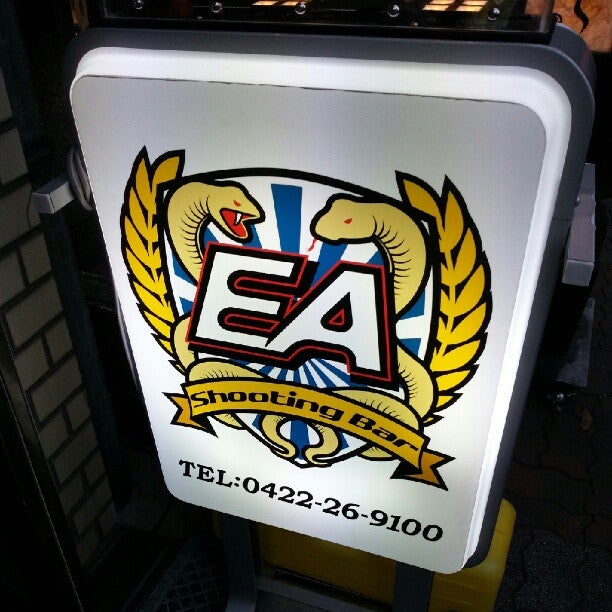 Another left-field choice, Kichijoji’s Shooting Bar EA isn’t really an arcade at all, but it is sure to be a hit with fans of the shooter genre.

The bar, which also serves a good range of cocktails and other drinks, allows customers to choose their own firearm and take aim in the in-house ranges. Don’t panic, not a trace of gunpowder can be found here, airguns, though incredibly realistic, are the only firearms in sight. This is surely the ultimate shooter experience.

Guns and alcohol aren’t a classic mix, but safety is of utmost importance here, creating an environment little more perilous than your average gaming arcade. When you want to take gaming to the next level – this is the place to head.

Next to Shinbashi Station, the New Shinbashi Building is a major salaryman spotting destination, a sort-of mixed use mall/food-hall/arcade complex that has a very “Tokyo” feeling about it.

The building is lively, especially around lunchtime and in the evenings, making it a great place to spend a couple of hours browsing, eating and importantly, gaming. There are various game centres, essentially mini-arcades, dotted around the complex, all pretty similar but highly characterful and authentic. Notoriously, the New Shinbashi Building is also the spiritual home of virtual mahjong, with players flocking here to sharpen their tactics before facing real-life opponents (which can also be done in the building) for money.

In brief, a really fun place to hang-out where you won’t bump into too many other tourists.

Not all arcades have to be sprawling monoliths, as demonstrated by Game Bar-A-Button, a nice little hang-out soothingly set apart from the maids and lights of Electric Town.

Inside, a huge HD screen hangs over the bar, rigged up to numerous old, defunct and cutting edge consoles. Enjoy a drink whilst playing some Sonic on the Dreamcast or speeding around Rainbow Road.

The bar has become central to keeping the classic gaming community alive in Tokyo, a fact made clear by the homely and well-loved feeling of the place. Friday and Saturday nights, like any bar, are particularly lively and the best time to see it at its best.

Perhaps the freakiest entry to our list, Anata No Warehouse (“Your Warehouse”) in Kawasaki is the antidote to the sleek post-modernism of many arcades. In fact, it might be considered an antidote to the cleanliness and order of the whole of the country.

The whole arcade has been painstakingly designed to resemble a fragment of Hong Kong’s infamous Kowloon Walled City. The building, its facade and interior both, are in a state of highly-crafted disrepair; it is faux rotting, rusting and falling apart. The designers evidently did their research; the look and feel of the place conjure an atmosphere far removed from modern Tokyo – all apart from the arcade games.

The main event is the building, which can make you feel like you’re starring in some first-person dystopian sci-fi romp, but there is also a good range of arcade games here too. Kawasaki is a city unto itself but is close enough to Tokyo to be reached easily, even on a short trip, if you fancy experiencing this oddity for yourself.

Lastly, an entry that is perhaps bending the criteria for an arcade a little far, but oh well. You may have heard of the Manga Cafe phenomenon; the idea is simple: you’re given a small room or booth, decked out with a computer and chair to use as you choose. You’re also granted access to a plethora of other entertainment options, commonly including a manga library and video game consoles.

Increasingly, these places are a refuge for the homeless, lost and divorced, but they are also popular with gamers who, for one reason or another, are unable to play at home. Sit and play on the latest consoles and games all night long if you like, no one is going to get in your way.

This is certainly an interesting way to spend a night, and perhaps a life-saver for the holidaying chronic console addict. Best of all, the USP for these joints is that they’re incredibly affordable, a factor which might help to sway you.

Things to Do in Tokyo at Night – Top 17 Nocturnal Activities