Where to Stay in Osaka – Everything You Need to Know

Unique in its charms, Osaka has something for everyone. Find out where to stay in the city with our comprehensive area guide and recommendations.

What to say about Osaka? Japan’s third city suffers a slightly downtrodden reputation, lacking the techno-futurist-megalopolis sheen of Tokyo, or the romanticism of traditional Kyoto. Those cities more than deserve their gleaming reputations, but Osaka should also get a look in.

Long Japan’s mercantile centre, modern Osaka wears its history on its sleeve, reflected in the atmosphere of its central hubs and outlying suburbs as well as the character of its people. Indeed, the city’s streets weave cosmopolitanism, contemporary cool and local charm effortlessly, giving it an atmosphere all of its own. The affable, talkative and funny locals are known for their character traits throughout the nation and are rightly proud of this fact, something you’re sure to get a taste of during your stay.

Now you’re suitably convinced of the merits of Osaka, the question beckons: where to stay? Despite a population of over 3 million, the city never feels overbearing, in part down to the interconnectedness of all its main spots. Wherever you stay you’ll have no problem getting around, though for the sake of convenience it’s worth ensuring you’re in the best location for your needs. In what follows we’ll give you the inside track on Osaka’s best areas and even some great examples of what’s on offer in the neighbourhood.

As in all Japanese cities, accommodation options in Osaka are plentiful, though prices and quality range. Let’s take a look at the main options:

Ryokans: Traditional Japanese hotels offering personalised service and exposure to the delights of classic Japanese hospitality. Usually expensive but worth it for the experience. Located across the city, though mainly in quieter areas. Options can be found here.

Western-style Hotels: Now the standard form of accommodation, they range from the luxury to the functional, browse here.

Guesthouses/Hostels: The budget option but a good way to make some friends and pick up travel tips. Hostelworld.com provides good listings.

Airbnb: The now popular service allows users to live like a local. Options proliferate. Check out the site for listings.

Where to Stay in Osaka

As said, central Osaka is pretty compact, though it can be split into several distinct and interesting parts. The Namba and Umeda neighbourhoods make up the city’s lively downtown, Tennoji offers a more historic old-world feel and the Bay-Area, though not particularly beautiful by Japanese standards, provides excellent access to many key tourist attractions, including Universal Studios.

Namba, or Minami (meaning ‘south’), makes up the southern end of central Osaka and is generally regarded as one of the most happening parts of the city. Home to myriad entertainment, shopping and dining options – the streets are perpetually packed with intrigued foreigners and locals alike.

The cluster of streets that make up Dotonbori show-off Osaka’s individuality – an area of bright billboards, bright clothes and eccentricity – this is a great place to begin your tour of the city. Close by is Kuromon Ichiba Market, a complex of over 200 stalls specialising in regional delicacies to try and buy, or alternatively, just gawp at. Osaka’s home of electronics, Den Den Town, is also in the Namba area, not to mention a good few shrines and parks.

Staying in this area puts you in the action and also offers excellent transport links, being served by three subway lines, train lines and a highway bus terminal. As is the norm in Osaka more generally, accommodation options range from the cheap and cheerful to high-end luxury. Here are two picks from both ends of the spectrum: 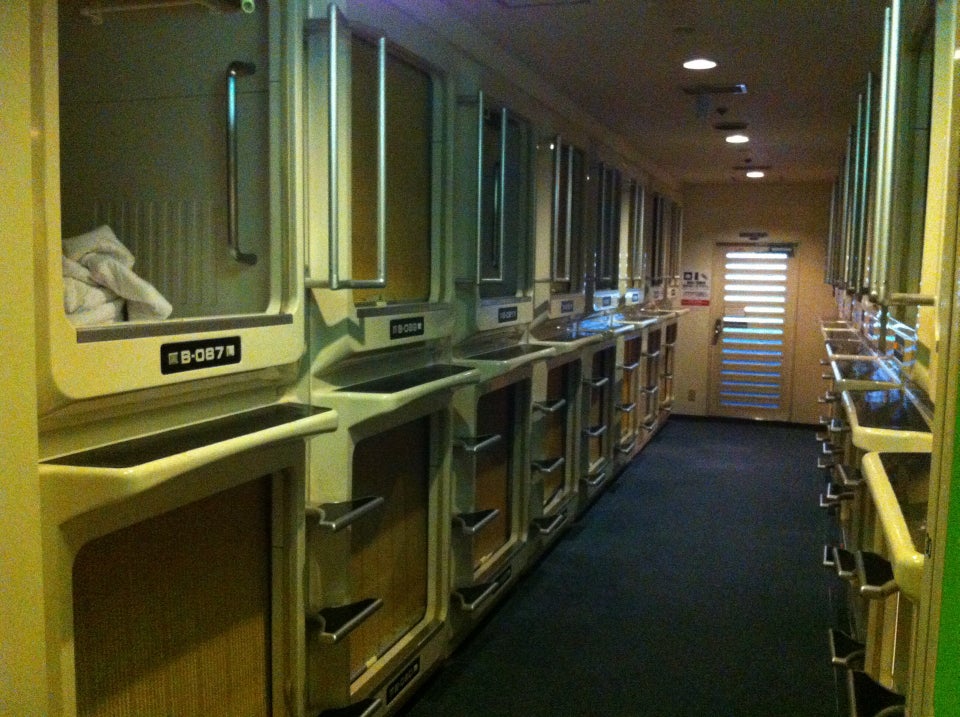 Osaka’s largest capsule hotel in the heart of Namba, within walking distance of all the area has to offer. The capsules are basic but functional, lockers are provided for luggage and usage of the on-site sauna is included in the price. The bathrooms are shared and the dorms are large, but private dorms for groups are available for a slightly higher price. If you’re simply after somewhere to lay you head on a night, you can’t go wrong with this place. 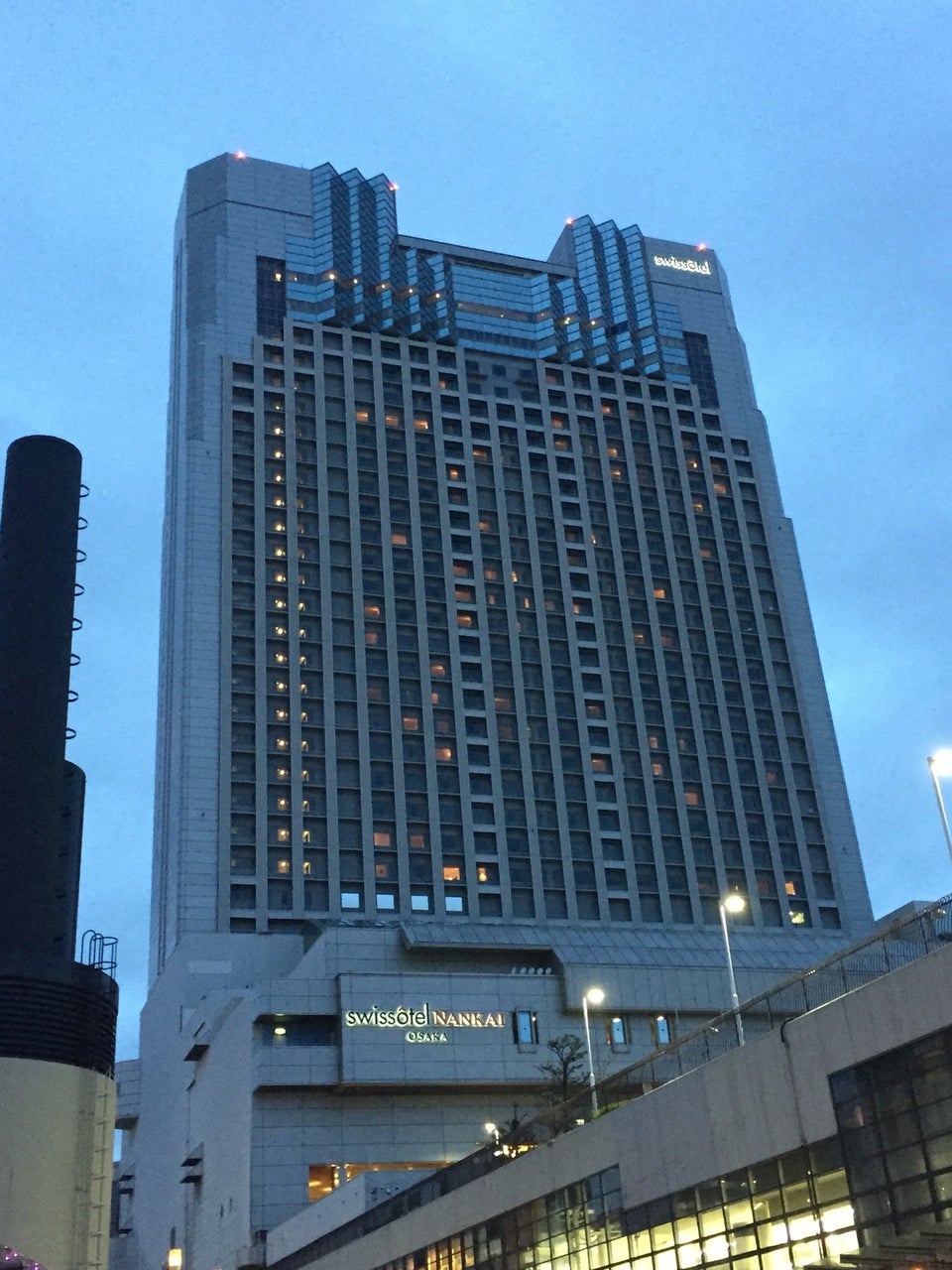 If you’re after a touch more glamour, the Swissotel Nankai is a good option. Located above Namba Station, this 36 storey tower is home to over 500 rooms, all decked out with an eye to elegance and comfort. Spa and fitness facilities are open to all guests, replete with an indoor swimming pool, gym and sauna. Several on-site restaurants cover all tastes, with menus of gourmet local specialities and international dishes alike. A solid high-end establishment and extremely foreigner friendly.

Umeda, or Kita (meaning ‘north’), is the other segment that makes up Osaka’s downtown. Comprised of the area surrounding Osaka and Umeda stations, this is the city’s main transportation hub and luxury shopping district. Namba’s charms lie in its ramshackle oddities, Umeda on the other hand, serves up a slightly slicker experience amidst its recently redeveloped station complex and looming office towers. This area perhaps suits a visitor with a larger budget or those in town for a short period.

The observation deck of the Umeda Sky Building gives you a good overview of the what the are is about. Umeda’s clean and modern streets buzz with business types and pleasure seekers both, all catered to with a more than healthy selection of contemporary restaurants and bars. However, what you can’t see from the tower is the labyrinthine underground shopping complex, guaranteed to bring your accountant out in a cold sweat.

It isn’t all glass and steel modernity however; the nearby Kitashinchi District does an excellent job of representing traditional Japanese dining and drinking with its narrow, lantern adorned streets.

Overall an unbeatable area for transport and higher-end tastes. A couple of recommendations from us: 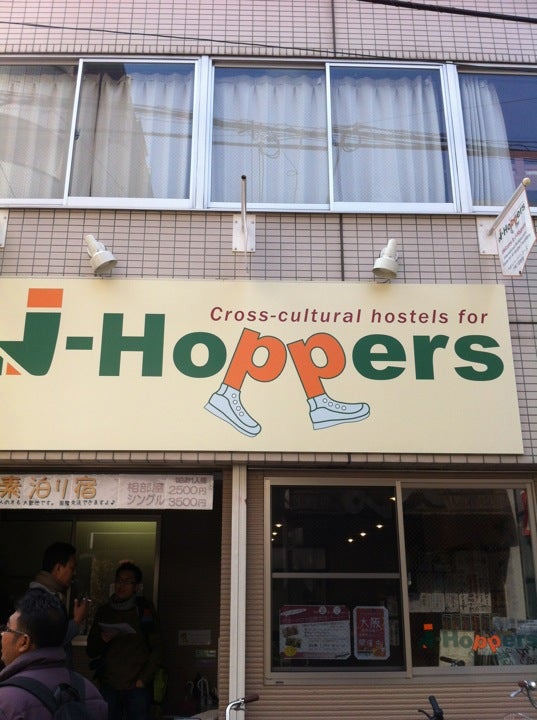 A 15-minute walk from Osaka Central Station, J-Hoppers is as cheap as you’re likely to find in this area. The vibe here is similar to that found in European backpacker hostels: relaxed and facilitating of cross-cultural exchange. In this vein, there is no curfew (fairly common in Japan!) and guests are encouraged to socialise in the communal areas. Dorms and private rooms are available though all bathrooms are shared, as is the kitchen and lounge. Staff are characteristically (For Osaka) friendly and well-used to those without Japanese language skills. 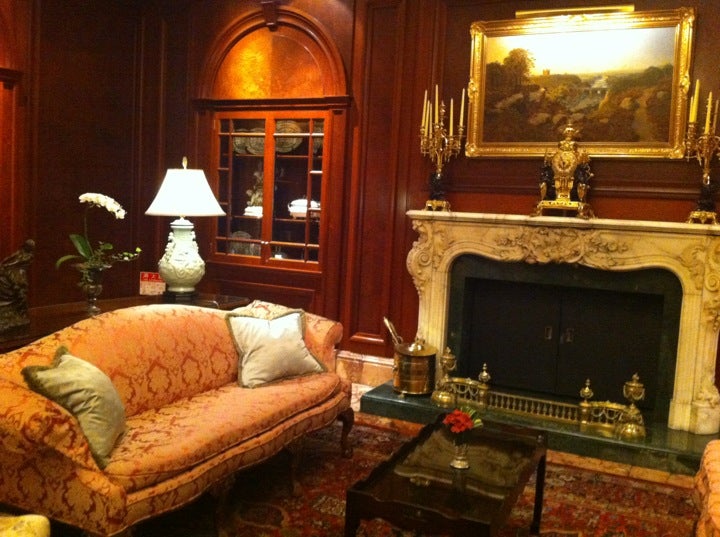 Osaka’s premier luxury hotel, resplendent in its fusion of traditional Japanese and European design influences. Each room comes with all the features you’d expect from a 5-star establishment, including artisan bed linen and ultra-fast WiFi. Outside the rooms; massage, gym, sauna and swimming facilities are all available and the 24hr concierge service is on hand to satisfy your every whim. If you’ve got the money, you will not be disappointed.

Price: book in advance and rooms can start at around 20,000 yen per night

In the south-east of the city, Tennoji, the area around the busy Tennoji Station, is another solid option for a stay in Osaka. Like London’s SoHo or Tokyo’s Kabukicho, the area was once associated with the seedier aspects of city life, but big-money investment in the area has put this to rest. Gentrification has a habit of sucking the life from an area, but Tennoji has done a good job of retaining its character in defiance of the property developers.

Like Umeda, shopping is a big deal here, though it shouldn’t be the main event. The area is home to Shitennoji Temple, one of the countries oldest, and Tennoji Park, a park and botanical gardens mix perfect for respite against the city. Shinsekai is also in the vicinity – one of Osaka’s most interesting neighbourhoods to explore. Developed at the turn of the last century when the city was keen to show off its industriousness and international outlook, styles imitating both New York and Paris were used in the design process, creating streets the like of which are found nowhere else in the world. The Tsutenkaku Tower is where the streets seem to gravitate toward, a subtlely decaying structure that looks like it was imported from some lost future. Easy access to Shinsekai is a big plus point of this area.

With a higher volume of yen-saving options in Tennoji and excellent transport links, it is definitely worth your consideration when on the look-out for accommodation. Have a look at our highlights: 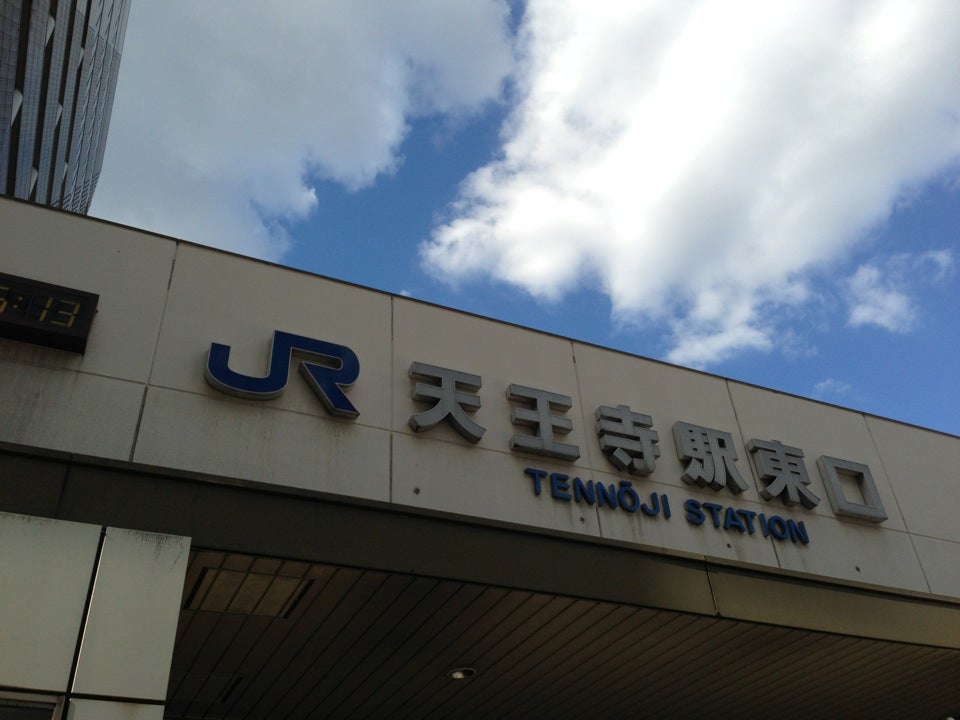 Just 5 minutes from Tennoji Station yet tucked away in a quiet neighbourhood, this guesthouse is cheap, functional and friendly. Self-catering facilities are on hand if you get sick of octopus balls, rooms are comfortable and the staff helpful. The consistently outstanding reviews speak for themselves on this one.

Price: a standard dorm-room bed begins at just under 3,000 yen 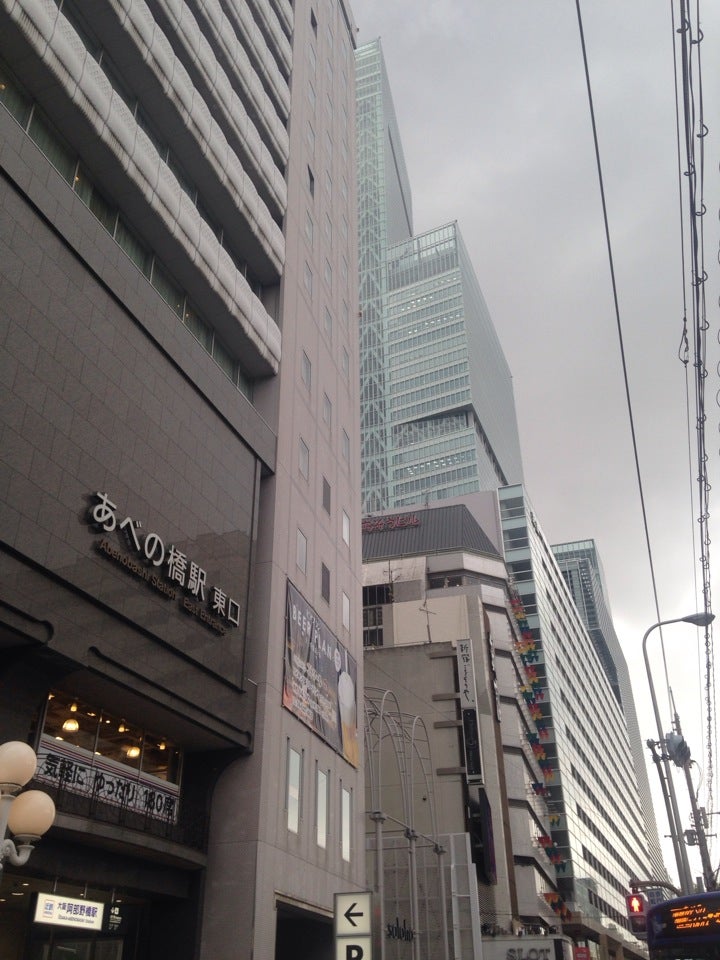 The Miyako is perfect if you want privacy and comfort without the price-tag of one of the bigger hotels. Rooms are to a good size, decorated tastefully and an array of facilities are available should you want them. Its location, right in front of Tennoji Station, also couldn’t be better. Not a particularly glamerous choice but it’s doubtful you’ll have any complaints.

Price: standard rooms begin at around 11,000 yen per night

Don’t head to the Bay Area in search of sea-front beauty or golden beaches, frankly, the area doesn’t offer much in terms of aesthetics. Close your eyes however and soak in the pure hedonism the area can provide to those fed up with shrines, temples and parks. Built to accommodate city sprawl, the bay is now home to a good few tourist attractions, including the ever-popular Universal Studios.

If you’re in town especially for Universal Studios, fancy being close to the world-class aquarium or have business at the trade centre, the bay area could be a good option. It is also easily accessed from the airport and the city centre isn’t too much of a trek away. A couple of options from us:

Offering panoramic views across the city, an abundance of dining and drinking options, unbeatable access to the attractions of the bay and reasonable prices, the Osaka Bay Tower is a safe bet. The hotel is very international in its feel and caters happily to foreign visitors with excellent service guaranteed.

Price: early-bird bookings start at 8,400 yen per night for a standard room 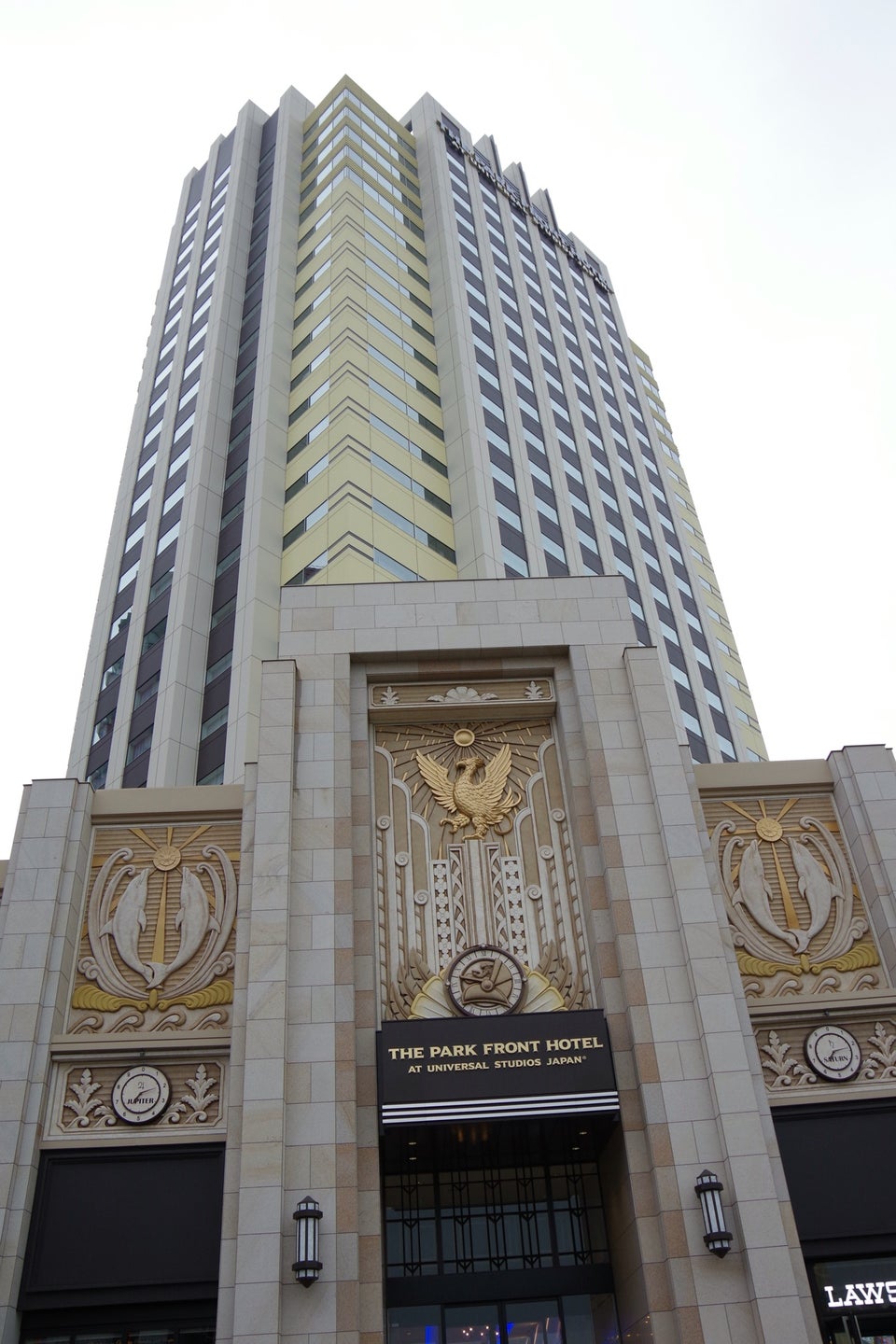 Try not to be perturbed by the brash Americana-infused neoclassicism of this hotel’s facade, for its design points to its primary use as a gateway to that most American of Japanese attractions, Universal Studios. Indeed, this is the closest hotel to the complex and a good spot to base yourself should this be where you plan to spend most of your time. The hotel is large with spacious rooms, two restaurants and all the usual trappings we’ve come to expect from American-style hotels.

Price: prices start at around 10,000 yen with advanced booking

Osaka is certainly a destination in itself, but its closeness to the more popular Kyoto and the wider Kansai region also makes it a handy jump off point for further travel. High demand in Kyoto pushes prices up so perhaps consider Osaka as your gateway, being but an hour-long train ride away. Though if you’re not convinced, check out our guide to where to stay in Kyoto (and while you’re at it, our guide to where to stay in Tokyo too).

The 12 Best Ryokans in Osaka

Where to Stay in Kyoto – Everything You Need to Know

Category Ranking【Where to Stay in Osaka】